As part of the Sustainable Campuses initiative, Ca’ Foscari Scientific Campus started the project “Orto in Campus”. The project consists of two parts: a biodiversity garden with rare autoctone or endangered species, and a synergic garden in which horticulture techniques will be practiced.

It is a tool for research and dissemination of scientific knowledge. The project was activated within Sustainable Ca’ Foscari, with an important contribution from Ca’ Foscari Real Estate and Purchasing Area, and will involve researchers of the Ecology group at the Department of Environmental Sciences, Informatics and Statistics.

Discover the Orto in Campus

The Orto in Campus is managed by a group of students, who are taking part to the project. They are managing all the phases: the seeding, the harvest, the monitoring and the study of the plants behaviours.
The video describes the first year of the project.

If you want to be part of the group contact us at the following address  sostenibile@unive.it!

"On the Green Road" Screening

July 7th, 2018 - h. 18.00, Auditorium Danilo Mainardi, Scientific Campus.
Free screening of the documentary "On the Green Road". Filming began in 2012, when two French cousins,  Siméon Baldit de Barral and Alexandre Haslé de Barral, decide to bike across 26 states,  with the aim of finding out new eco-friendly practices in developing countries. This documentary brought to the founding of an association with the will to stimulate the debate on environmentally-friendly lifestyles all around the world.
Documentary running time: 80' - subtitled.
After the screening, the viewers had the chance to chat with the director via Skype.

March 18th, 2018 - Festa di Primavera al Fontego dei Turchi.
The Fontego, home of the Natural History Museum, welcomed representatives of businesses and institutions focused on the vegetable field. Ca' Foscari University of Venice has also attended through its research team in Vegetable Ecology, from the Department of Environmental Sciences, Informatics and Statistics, who presented the "Orto in Campus" project.

Impact of Monocultures on Landscape and Biodiversity

May 16th, 2018 - Conference Room, Scientific Campus of Mestre
The main speaker of the conference, naturalist and writer Michele Zanetti, talked about how monocultures have negatively affected the Venetian countryside. He also proposed feasible alternatives to the current agricultural trends.

The Festival of solidarity economy and relations "Si può fare"[IT] took place in Mira from September 30th to October 1st: a meeting place for associations, companies, craftsmen, farmers who work with environmental sustainability and social welfare in mind. The festival included exhibitions, labs and good practice workshops on five main themes: Earth and food, energy and inhabitancy, mobility and territory, work and economics, consumption and reuse.

Ca’ Foscari took part in the festival on Saturday September 30th with the introduction of the Orto in Campus project through an exhibition and two presentations hold by the Department of Environmental Sciences, Informatics and Statistics: “Urban biodiversity: the importance of quality of life” and “The experience of a synergic orchard at Ca’ Foscari” curated by a group of students who were involved in the “Orto in Campus” project.

Any student enrolled at Ca’ Foscari can take part in the project and be involved in managing the orchard and the garden and in the seminars that will be held in November on synergic horticulture and cultivating endangered species, involving associations in urban orchards locally active in Mestre and Marghera.

For more information contact us at the following address  sostenibile@unive.it

This activity can be recognized as a sustainability competency, with the agreement of the professors coordinating the student’s department. 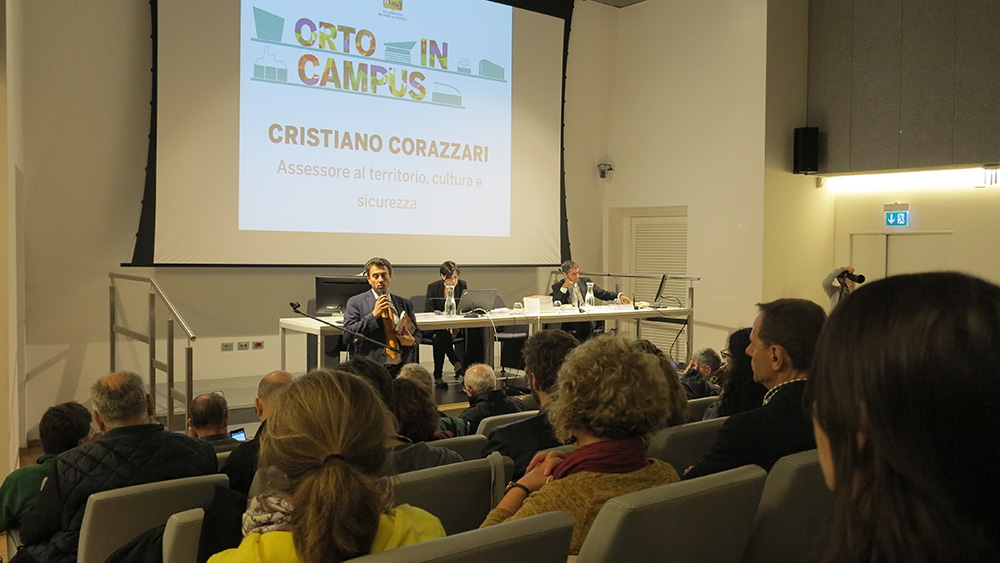 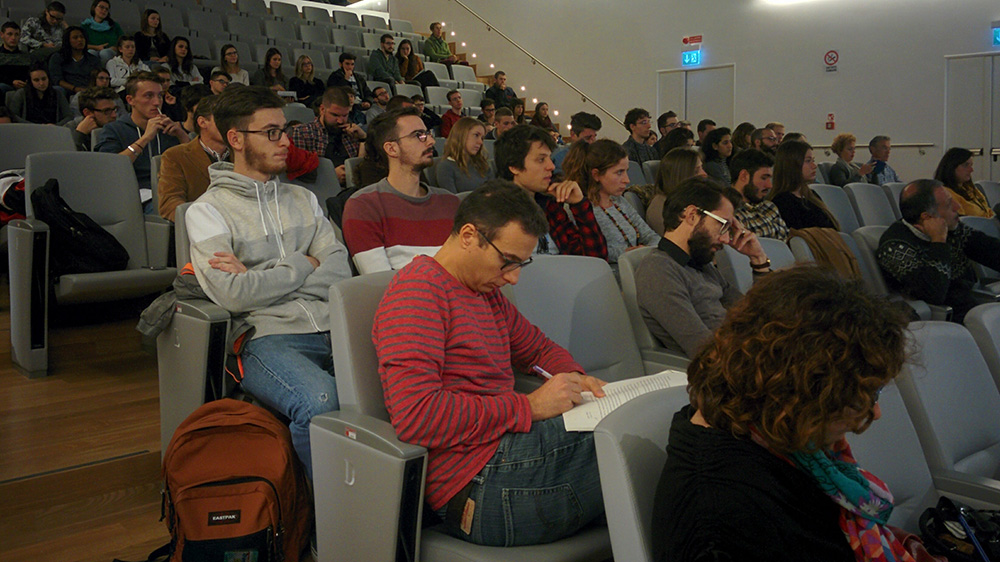 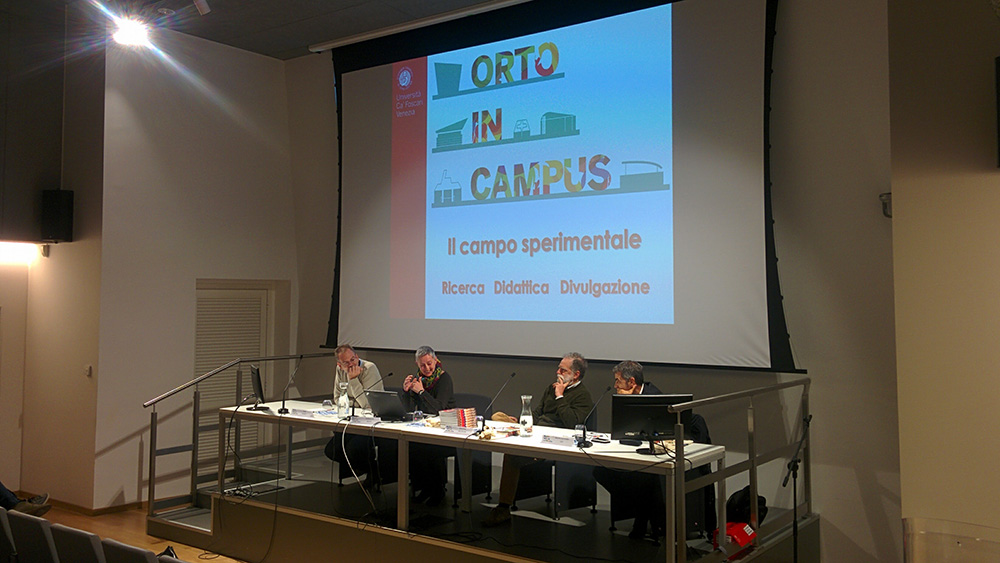 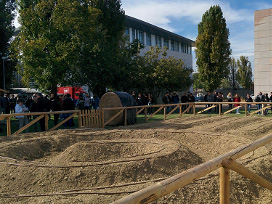 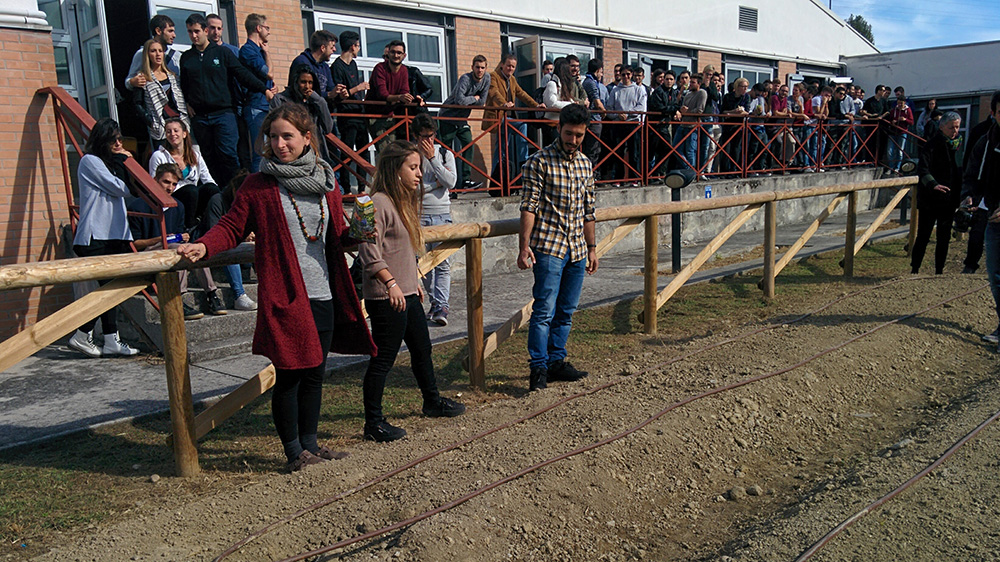 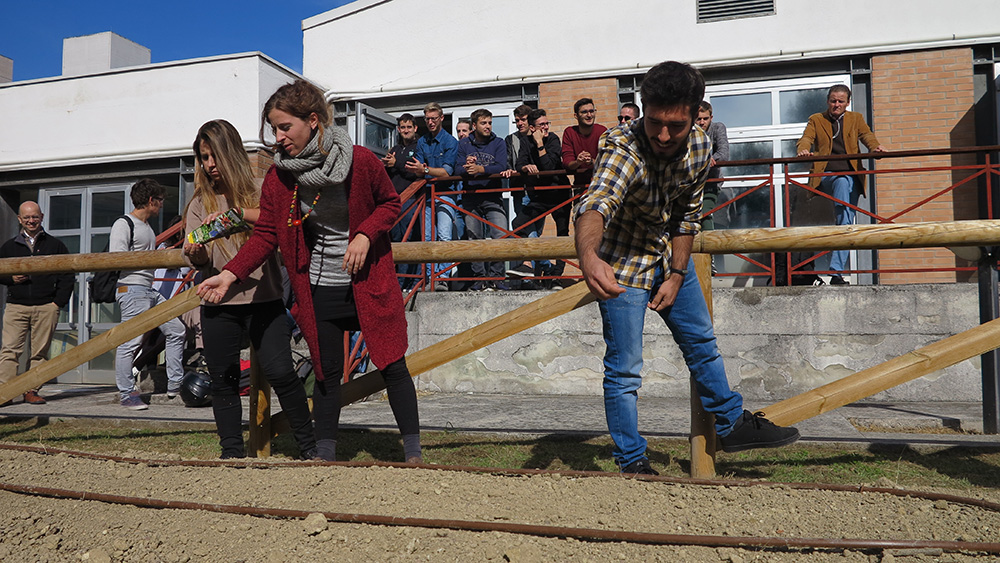 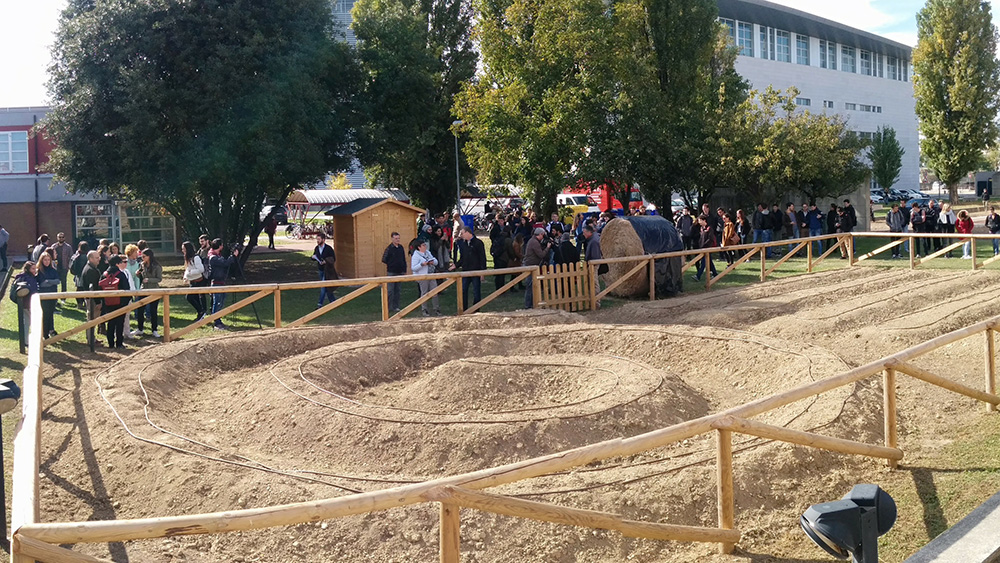 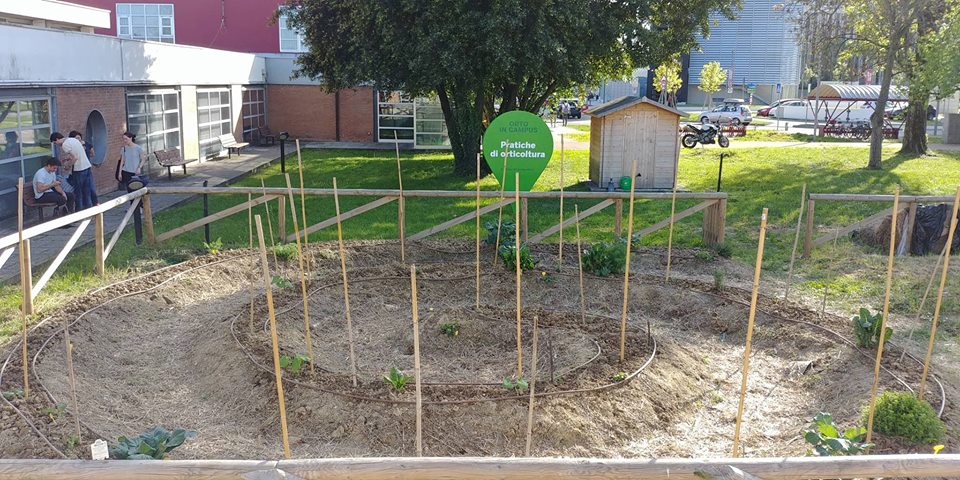 The concept of a synergic orchard is based on the principles of organic agriculture written by the Japanese agronomer Masanobu Fukuoka and the Spanish farmer Emilia Hazelip: farming as naturally as possible relying on mulch to keep soil fertile in time and favoring a no-till agriculture to let animal and vegetal microorganisms develop in the soil.

Four elements are not involved in such an approach:

The orchard tends to find a natural balance growing natural products. The spiral form given by the flower beds represents the link of nature with the universe, the phases of the moon, seasons and atmospheric weather from which we all depend and serves to improve the connection between all the cultivated species.

The orchard becomes an open-air laboratory of sorts in which students, especially those enrolled in environmental sciences, will be able to experiment and test bio-ecological concepts they studied in class.

The Garden of Biodiversity

The idea of a Garden of biodiversity at the Scientific campus emerged by the realization that we can only get closer to sustainability by acknowledging the existence of a “natural capital” and by attempting to implement and maintain it. Destruction of natural habitats, pollution, competitive pressure of exotic species, genetic pollution, global warming are among the many pressures that caused the extinction of more than a fifth of the plant species on our planet.

In Europe, 650 plants are considered extinct or in a critical situation. A recent study has enhanced how since the 1980s in the Veneto region 48 species have been lost. 1,500 are currently at risk, representing 43% of all the regional vegetation. Plants are an essential resource for our planet and man depends on them for all aspects of life: food, clothing, health, leisure.

In the Garden of Biodiversity a small collection of rare or at risk plants from the Veneto region will be presented as an opportunity for environmental education and as a resource for research and experimentation.

Tuesday October 11th at noon at the Auditorium Alfa at the Ca’ Foscari Scientific Campus the opening ceremony of the orchard on campus launched the initiative.

After the welcome addresses of Fabio Pranovi, representing Ca’ Foscari rector, of Cristina Corazzari, culture and security councillor for the region of Veneto, and Agostino Cortesi, Deputy Head of the  Department of Environmental Sciences, Informatics and Statistics, the following people spoke:

During the event, the project “Orchard on Campus” was presented as well as a call for participation for students and the “Regional red list of vascular plants. Region of Veneto”, a list of rare and endangered species in the Region of Veneto.

This milestone is the first list establishing the state of conservation of plant species in the Region of Veneto. The book introduced a list of rare and endangered species in the region of Veneto (1,509 species, 43% of the local flora) and the evaluation of their extinction risk using  the criteria established by the International Union for the Conservation of Nature (IUCN) adapted to the local scale. This inventory is mainly addressed to experts but can be read by a wider audience interested in plants, students in schools and universities, administrators, and by all of those who work in related fields and wish to improve their knowledge of our “natural capital”.

Despite the fact that the Red Lists are dynamic documents which can never be regarded as definitive, the data presented in this book gathers synthetic information on the conservation state of vegetal species and will be a useful basis for regular monitoring on the efficiency of implemented actions and actions to be undertaken to contrast risk factors and stop biodiversity loss in Veneto.

Ca' Foscari University of Venice, as part of its institutional aims and in fulfillment of the obligations set forth in article 13 of the EU Regulation 2016/679 ("Regulation"), gives you information regarding the processing of personal data collected by cookies and/or similar technologies when you visit the www.unive.it website (“Website”). Cookies are small pieces of information that a website sends to the user’s device where it is automatically stored and then sent back to the same website or to a third party every time that the website is visited using the same device.

The data controller is Ca' Foscari University of Venice, with headquarters in Dorsoduro n. 3246, 30123 Venice (VE), legally represented by the Rector pro tempore.

You can always manage your cookie preferences through the browser setting. If you disable all cookies, please note that some activities on the website will not be possible anymore (i.e. the ones on the pages accessible in the Personal Area). To find out more on how to manage cookies through browser settings, please visit:

If you want to know more about profiling cookies on your browser, please visit http://www.youronlinechoices.com..

The processing of personal data will be carried out by authorized employees (in compliance with Article 29 of the Regulation and art. 2-quaterdecies of D. lgs. 196/2003), with the use of computerized procedures, adopting appropriate technical and organizational measures to protect them from unauthorized or illegal access, destruction, loss of integrity and confidentiality, even if accidental in nature.

6. Recipients and categories of recipients of personal data and data transfer outside the European Economic Area

For the purposes set out above, in addition to specifically authorized employees and collaborators of the University, personal data may also be processed by those who execute outsourced activities on behalf of the University  in their capacity as data processors (the updated list is available at: https://www.unive.it/pag/36643/).

Personal data collected by third party cookies may be transferred outside the European Economic Area (EEA) in compliance with the provisions of the Regulation.

7. Data subjects rights and how to exercise them

As a data subject, you have the right to obtain from the University, in the cases provided for by the Regulation, the access, the rectification and the erasure of your personal data as well as ask for the limitation of the processing of your personal data or to object to the data processing itself (articles 15 and following of the Regulation). The request can be submitted, without any particular formal procedures, by contacting the Data Protection Officer directly at  dpo@unive.it or by sending a communication to the following address: Ca' Foscari University of Venice - Data Protection Officer, Dorsoduro 3246, 30123 Venice. Alternatively, you can contact the Data Controller, by writing a PEC (certified email) to  protocollo@pec.unive.it.